April 14, 2016 – Until 22 May 2016 the British Museum shows a coins and medals display in Room 69a, Hoards: the hidden history of ancient Britain, supported by Stephen and Julie Fitzgerald. 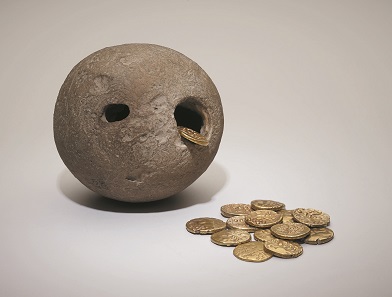 The Westerham hoard, a hoard of gold Iron Age coins found inside a hollow flint in 1927. © The Trustees of the British Museum.

Buried treasure excites the imagination, especially the idea of discovering a pot of gold or silver, but these discoveries are also of vital importance. This exhibition explores the stories behind the headlines focusing on prehistoric and Romano-British hoards from across the United Kingdom. 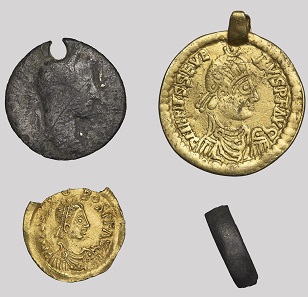 Tracing the story of hoarding from Bronze weapons discovered in the river Thames and the first Iron Age coin hoards, through to the Hoxne and Oxborough hoards, buried after the collapse of Roman rule in Britain. It will showcase recent discoveries of hoards reported by finders and archaeologists through the Treasure Act and studied at the British Museum. 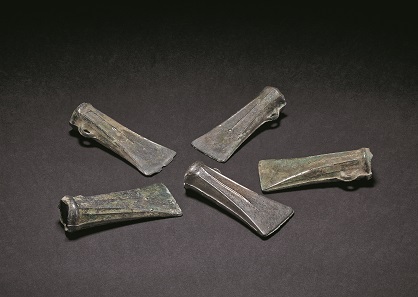 Bronze Age socketed axes from the Salisbury hoard. © The Trustees of the British Museum.

Under the Treasure Act 1996 there is a legal obligation for finders to report Treasure. Since the advent of the Act the number of finds reported has increased fivefold from 201 cases in 1998 (the first full year of the Act), and 1008 in 2014. 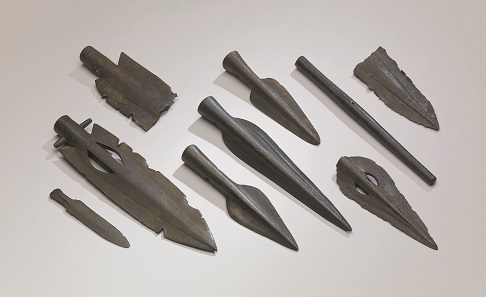 Hoard of Bronze Age weapons found in the River Thames at Broadness in Kent © The Trustees of the British Museum.

The exhibition explores the reasons why ancient people have placed precious objects in the ground or in water since the Bronze Age. They may have been accidentally lost or stolen, discarded as worthless, saved for recycling, hidden for safekeeping, or offered up to the gods. 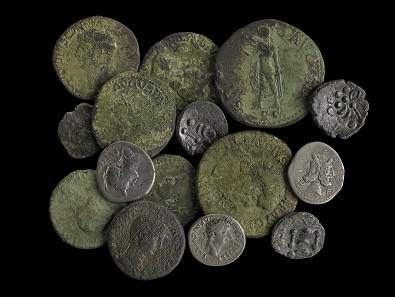 A hoard of Iron Age and Roman coins found in Owermoigne, Dorset, in 2010. © The Trustees of the British Museum.

Prehistoric communities deposited hoards as part of rituals to honour gods or ancestors, and to demonstrate power and wealth. 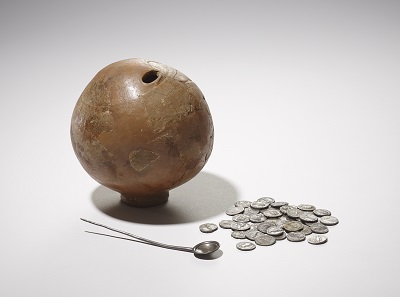 A Roman ceramic money box, silver coins and spoon found by a boy digging in his back garden in Muswell Hill in 1928. © The Trustees of the British Museum.

The large number of coin hoards dating to the later Roman period could suggest that this period was one of political instability and economic insecurity. However, the archaeological evidence may point to different explanations for the burial of these hoards. 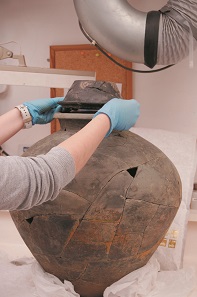 The centerpiece of the exhibition will be the enormous Frome hoard pot, which held a discovery of 52,503 Roman coins, the largest to be found in a single container. 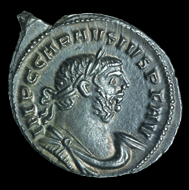 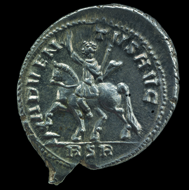 Silver denarius of the usurper emperor Carausius (AD 286-293) from the Frome hoard. © The Trustees of the British Museum.

This hoard was discovered in 2010, and raised many questions that initiated an Art and Humanities Research Council funded research project, Crisis or continuity? Hoarding in Iron Age and Roman Britain, jointly run by the British Museum and Leicester University. The project is investigating how and why hoards were buried.
Aspects of the Frome hoard’s burial suggest that the coins were never intended to be retrieved. The extremely fragile pot was lowered into the ground and then filled with coins, so lifting the delicate vessel would have caused it to collapse under its own weight. It could therefore be a ritual offering made by the community.

Coins from the Hoxne hoard found in 1992 by Eric Lawes will also be on display. The finder made this significant discovery while searching for a hammer, but reported the find immediately. 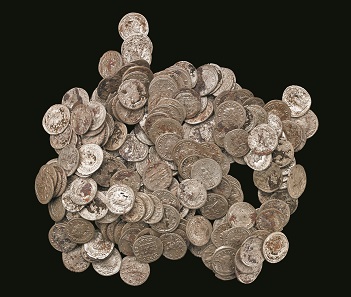 Silver coins from the Beau Street hoard, 3rd century AD. © The Trustees of the British Museum.

Also featured is a replica of a money bag from the Beau Street hoard. The original hoard of around 17,500 coins was discovered by archaeologists in the centre of Bath. During the conservation process, one cluster of coins was scanned, and the data used to create a 3D computer model, which was 3D printed to form a replica of the original coin bag. Conservators at National Museums Liverpool painted the plaster cast made from the print to form a virtually identical copy of the original coin cluster. 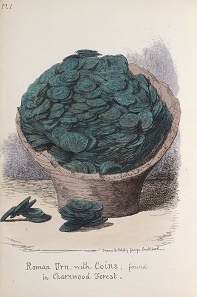 Roman Urn with Coins found in Charnwood Forest, drawn and etched by George Cruikshank (1792-1878). Frontispiece to the Journal of the British Archaeological Association VII, 1852. © The Trustees of the British Museum.

This small exhibition celebrates the discovery of hidden objects in Britain and the research that followed these finds, which is helping to re-write history.

For more information on the exhibition please go to the British Museum website.